These two pictures are of a pub called The Henry VIII demolished in the 1950's. It is where Bank Court is now. At one time there were 24 drinking houses (pubs) in the Old town of Hemel Hempstead. It is difficult to find out exactly where all the pubs were located, especially as the town has been around for around five centuries. Some inns and drinking houses disappeared altogether and others became private houses or other businesses.

The Boot, photographed in the 1880s was at the beginning of the High Street from the Marlowes end, at what is now No.9. As it did not have stables it was a lodging house with a bar, the pub was bought by Benskins brewery and was closed in 1939.

At 19 the High street is the Rose and crown which was a butchers in 1523 is one of only 4 now remaining. Another pub is The Cock (Number 24 the High street) which was an imposing building standing 3 storeys high and with a celler and was closed in 1857 when a Joseph Cranstone bought it to extend his buisness of ironmongery, he also owned number 25 which was the original iron mongers.

The Swan was at No 29 was a larger building in 1756 it was owned by a man called Thomas Sellar and it had 5 bedrooms and stables which could hold 31 horses it was finally closed in 1963.


The King’s Arms which, is the second of the remaining inns, is an early 17th century. Previously, in 1750, the inn was 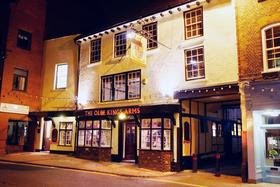 renamed the Prince’s Arms, and towards the end of the 18th century it merged with a another inn called the Black Lion, with John Mallatrot as landlord. Later the two inns separated with the King’s Arms reverting to its original name. 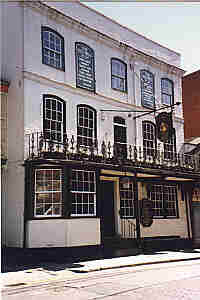 Old Bell, the third of the remaining pubs, was the largest and most prestigious inn of the High Street it had room for nine beds and stabling for 54 horses. Dating from 1603, the original inn still exists but is hidden by a later 18th century extension which was built to level up the building line of the street.

The shop at No.63, like the Old Bell, has an early 18th century front to a 16th century timber-framed building and this was the site of the Angel Inn. Also in this area was The Boat, run by Martha Durrant in around 1838, and a very early inn, The Legge, just two of the inns that have long since disappeared.The shops at Nos. 75 and 77, were originally built at street level in the mid -16th century. Forming one building it does not conform to any known building plan and it is possible that until 1781, it was a small inn - The Mermaid. The building was altered over the centuries with two wings added around 1600. One with minor extensions in 1800, was the site of an inn, the Lord Nelson. The Hawe family, who owned the shop in the 20th century found the sign of the Lord Nelson in their cellar. 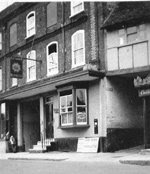 The shop at No.81, was once The Sun inn, which was built sometime in the 17th century was an inn of quite a considerable size. There was room for five beds, and extensive out buildings that were used for stabling 30 horses. In addition there was room for five wagon drivers to sleep above the stables. The Sun survived into the 20th century, finally closing in 1960.

UP the High Street, at the corner of Cherry Bounce in this picture on the right, once stood the Oak, which was renamed the Royal Oak to commemorate the restoration of Charles II to the throne in 1660. In 1664 part of it was used as a house of correction with a Mr Christopher Mitchell appointed as master. By the end of the seventeenth century, however, the building was used as an ordinary jail. Later in the mid nineteenth century after the jail was closed, In 1851 a Mrs Isabella Harrington ran this old jail as a public house, but in reality it was a common lodging house. The beer house eventually gained a full license but this run down pub was finally closed in the early 1970s, and the site was then converted into three houses

Further on was the Brewers Arms which remained a common lodging house well into the 1960s.

The Old Kings Head, another beer house, was at No.66, was still operating in 1882. Next door but one to the Old King’s Head, at what is now Tow

nend House, stood the Red Lion, which had accommodation for four beds and stabling for 16 horses. But the inn was little more than a common lodging house. By the end of the nineteenth century, the brewers, Chesham and Brackley, closed the pub in order to transfer the license to the Midland Hotel, Midland Hill, Hemel Hempstead. The property was then sold to East the drapers.

The Lamb pictured here on the left was at No 48 dates back to the sixteenth century.

Then past the Old Town Hall is the White Hart pictured on the right, the last of the four remaining pubs. Unlike the Old Bell, the inn does not have a false front, but is one of the seventeenth century inns which stood facing the original street. First registered as a tavern, by the mid nineteenth century, the White Hart had flourished to become a busy inn.

Beyond the White Hart, the Dolphin stood on the site of the now closed National Westminster Bank. It was a small ale house which disappeared at the end of the eighteenth century.

At the bottom of the High Street, on a site now occupied by The Pine Shop at Nos 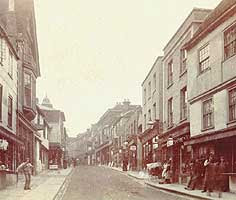 . 24-26, stood the Half Moon Inn which was established in the early eighteenth century. There were two bars, a kitchen and ‘four sleeping rooms’. In 1901, the brewers, Wellers of Amersham, bought the Half Moon as a freehold public house together with the shop next door, No.26 High Street.The property was later sold to William Frederick Williams, a greengrocer, the Half Moon having been closed on December 31, 1912.

The Shoulder of Mutton, once known as the Castle, which was situated at the lower end of the town. This could have been in Queensway, which was once part of the High Street. In 1791 a property was sold called the George Inn .There was a pub in 1690 called The Ship which was formerly known as The Hollybush which was at number 11 the High street. No.49 was once the site of the Three Compasses. The Coach and Horses was once situated at No.86.This beer house, patronised by tramps and labourers kept going until 1912.
Posted by stevep at 05:56

Hi - This looks an interesting blog, and I wondered if you plan to keep posting to it?

It's the kind of blog we would be happy to link to on http://www.yourlocalweb.co.uk/

If you think you will continue to update this, and would like to be listed please submit your URL.

Really took me back this blog, Hemel Hempstead has more going for it than people appriciate!

It's amazing to think about what used to be there and what still exists! I think Nottingham has some of the oldest pubs in the UK which are pretty cool!

Although one pub in Marlowes has been mentioned, Henry VIIIth, there were others: Sebright Arms, Half-way House, Plough, Wagon & Horses. These were just in my lifetime, there may well have been others.