This was Hemel's first cinema called the Princess which was 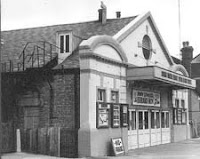 situated roughly where the Civic Centre is today it was built
before the first world war. There was no electricity supply in
the town, so they had to generate their own. They had a
detached building at the rear where there were two engines
to generate the power. the cinema was demolished in 1962.

The second cinema was called the Luxor and was built next to where woolworths is now, It closed in 1959 and was demolished in 1960.

The Odeon not sure when it was built but it shut down and was made into a JD Wetherspoon pub which opened in july of 1998.

And now the present day Cinema in Hemel. The Empire in
jarman Park Leasure world with 13 screens. Rumours are
that the whole of leasure world is to be demolished if that
is true where wil the next cinema be.

it looks great - check out youtube for video's.....l x

We moved to Hemel in 1959 and the Odeon was brand new at that time. Also the carpark across the street was still being constructed or had just opened. We lived near the top of Hillfield Road.